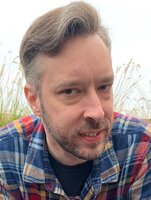 Erich James Ligo, 46, lifelong resident of Freehold Township, passed away on Tuesday, December 21, 2021. He received his bachelor’s degrees from Montclair University and was an expert with computers. He worked as an IT technician and in his spare time he enjoyed gaming of all kinds, and hanging out with his friends. In his younger years he enjoyed spending time with his family, fishing, riding bikes and going on vacation. He was known for his lawful good sense of humor, rapier wit, and selfless nature.

He is survived by his parents, Charles and Doris Ligo of Freehold; siblings, Jason Ligo of Toms River, Jeffrey Ligo and his wife, Sarah of Farmingdale, Kenneth Ligo and his wife, Angela of Myakka City, FL, and Stuart Ligo and his wife, Erica of Morrisville, PA; nieces and nephews, Jeffrey Jr., Autumn, Nathaniel, and Cora; aunts, Barbara Ligo of Tinton Falls and Luise Peck of Mt. Pocono, PA.

A visitation for Erich will be held at the Clayton & McGirr Funeral Home, 100 Elton-Adelphia Road (Route 524) Freehold Township, on Wednesday, December 29, 2021 from 1:00 to 4:30 PM with his funeral service to follow at 4:30 PM. Anyone who can not attend in person is invited to participate via webcast HERE. For those who desire, memorial contributions in Erich’s name may be made to a charity of your choice. For information, directions, or condolence messages to the family, visit www.claytonfuneralhome.com