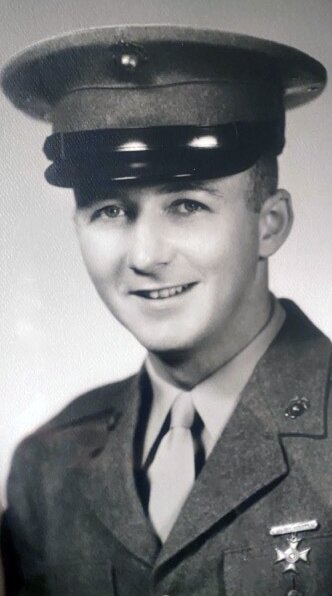 Robert G. Lennon, 85, of East Brunswick passed away peacefully on Thursday, March 10, 2022 at Robert Wood Johnson University Hospital, New Brunswick.  Robert was born in Brooklyn and raised in Queens, but settled in East Brunswick, NJ to raise his family.  Bob was a proud United States Marine Corps veteran and reservist, reaching the rank of Sergeant.  Working in the finance industry his adult life, Bob retired from M&T Securities in Buffalo.  Prior to that, he worked on Wall Street for Clark Dodge & Co., Inc. and Blunt, Ellis & Loewi, Inc. in an Executive capacity before moving to Buffalo. Bob served as the President of the “Cashiers Association of Wall Street” as well.  Bob was an avid reader; his passion was American history.  He also was a movie buff and enjoyed watching old movies of which he could recite dates, actors’ names and other trivia.   John Wayne was an all-time favorite. The Buffalo Bills had a loyal fan in Bob as did the NY Yankees.  His pride and joy however was his role as Pop Pop. As Pop Pop, Bob found crafting silly pictures and creating hand puppets a fun and entertaining pastime to keep his grandchildren laughing.  He loved swimming, so along with his grandchildren, would spend summer days swimming and playing pool games, tossing them into the water until they were all exhausted!

Bob is survived by his children, Colin Lennon and his wife, Linda of Freehold, Robin Collins and her husband, Daniel of Colts Neck and Sean Lennon of Freehold; six grandchildren, Erin Collins and her fiancé, Thomas D’Alba, Paige Lennon and her fiancé, Christopher Rocco, Christian Collins, Robert Collins, Joseph Lennon and Codi Lennon; a loving sister, Florence Kirchner and her husband, Thomas of Oracle, Arizona; a niece, Suzanne Hudon of Kennewick, Washington; and a nephew, Matthew Kirchner of Goleta, California; and other family and dear friends.

Visitation will be held at the Clayton & McGirr Funeral Home, 100 Elton-Adelphia Road (Route 524), Freehold Township on Friday, March 18, 2022 from 4:00 to 7:00 PM with his funeral service to follow at 7:00 PM.  Interment will be private.  For those who desire, donations in memory of Bob may be made to the Wounded Warriors Project, P. O. Box 758517, Topeka, KS  66675.  For information, directions or condolence messages to the family, visit www.claytonfuneralhome.com