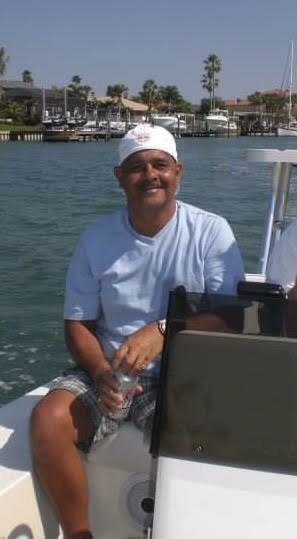 Francis “Frankie” Joseph Gabriel, 63, of Farmingdale passed away on Monday, March 14, 2022 surrounded by his loving wife, daughters and son-in-laws.  He was born and raised in East Flatbush Brooklyn New York and moved to Farmingdale, New Jersey with his wife Suzanne and their daughters in 1987 to fulfill their dreams for their family.  Frankie began his working career in his best friend/cousin Phil’s auto body collision shop “Red Carpet'' in Brooklyn.  It was there that he learned his work ethic.  Frankie later worked as an Operating Engineer for Local 94 before his retirement.

Maybe you’ve seen him around town while he was playing the lotto or shopping the sales at the grocery store.  Perhaps you don’t know him by name, but know him as the guy with the earrings or the guy who mows his lawn with the dog on his lap.  We know him as “Frankie…FG…Daddy…Ciccio.”  Those who knew him knew he loved when “the mountains were blue” as he enjoyed a cold Coors Light.  Frankie loved making sure his home was always open to everyone and would take pride in making sure it had the best curb appeal.  He had a meticulous routine when it came to his lawn.  If you drove past his house you would find him mowing the lawn or fertilizing it to ensure he had the greenest lawn around, and he did!  He loved his wife’s cooking and enjoyed watching sports, especially the Yankees and Nascar.  Frankie loved to frequent their other home in St. Petersburg Florida and while there, could always be found on the beach or by the pool relaxing and working on a tan.  Family was the most important thing to him.  His special relationships with his friends and family including many Uncles, Aunts, cousins, nieces and nephews were always apparent when he would light up while talking about them.  You knew he loved you if he gave you a special “nickname” or called to ask you “How much rain did you get?” There was nothing in this world that Frankie loved or took more pride in than his wife, daughters, their husbands and his Granddaughters who adoringly refer to him as their Ciccio “Cheech”.  Every year as a family they enjoyed a “family concert” and he loved to set up the tailgate with games.  Sitting around the pool with his family, cooking his famous ribs on his Big Green Egg, and enjoying the “art of doing nothing” was always something he looked forward to.  His happiest moments were spent with his family making memories.

Becoming a Grandfather filled Frankie with immeasurable pride.  He was the Ciccio that would do silly dances to get his Granddaughters to have belly laughs.  He loved to take them to the reservoir to watch the eagles, bike rides around the block and swimming in the pool.  He loved everything about them and had no problem playing Barbies, building a tent or blocks or reading stories.  But his most favorite thing to do with them was to snuggle on the couch and enjoy an Italian ice.

Frankie was the original “Girl Dad.”  Growing up he built his girls the ultimate tree house and backyard so they could have the best childhood.  Their happiness is all that mattered.  No conversation was off limits.  He was gentle, soft spoken, non-judgemental and always made sure his girls knew they could go to him for anything, and they did.  He enjoyed whatever it was that they enjoyed.  He never missed a dance recital, soccer game, school play or award ceremony.  He was proud of his girls and always let them know it.  He is their best friend.

When he met his soon to be son-in-laws, Frankie knew that they were the ones for his girls.  Their relationships developed into a genuine, respectful and fun loving father/son bond.  They enjoyed talking about sports, yard work and developing inside jokes.  He thought the world of them and knew all his kids were happy.

If you knew Frankie, you knew his wife Suzanne.  They were a team.  True soulmates who stood by each other and supported and respected one another.  Seeing them together one would think “I hope I have a marriage like that.”  Their bond was recognizable.  Frankie never held back to show his love and affection to Suzanne.  If you were in a room with them you could see the love in his eyes, witness his sincere gestures and observe his gentle touch all to show his love and affection to Suzanne.  He was a loyal husband, and thought the world of her.  She is and always will be the love of his life.

Frankie is predeceased by his mother, Yolanda Todino-Gabriel. He is survived by his loving wife of 38 years, Suzanne Gabriel of Farmingdale; Daughters, Jennalee Faiella and her husband, Joseph of Belmar and Erin Gabriel and her fiancé, Alex Debay of Hoboken; Four Granddaughters, Jordyn Elizabeth, Lucia Rae, Cecilia Grace and Gia Todino; Maternal Aunt, Giovannina Grosso of Howell and Mother-in-Law, Julia Thomas of Howell, New Jersey.

Get Directions
Share Your Memory of
Francis
Upload Your Memory View All Memories
Be the first to upload a memory!
Share A Memory