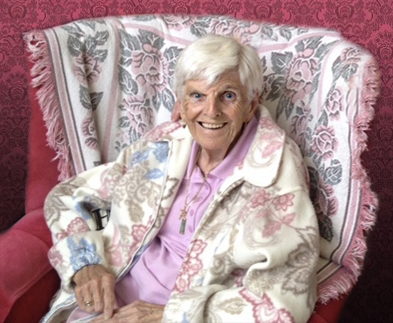 Shirley M. Barron, 87, of Manalapan passed away peacefully at home on Friday, January 13, 2023.  Shirley was born in St. John’s Newfoundland, Canada before coming to the United States and settling in Brooklyn. She had lived in Howell before moving to Manalapan in 2013. Shirley retired as a research supervisor from Union Data in New York City in the mid 1980’s. A woman of faith, she was a former parishioner of St. Catherine of Siena Catholic Church, Farmingdale and most recently a parishioner of the Co-Cathedral of St. Robert Bellarmine, Freehold Township.  Shirley was a skilled knitter and crochetier.  She was a loving wife, adoring mother, doting grand and great grandmother, and kindred sister.

Shirley was predeceased by her husband, Stephen Barron; a son, David Barron; and brothers, James Farrell and John Damian Farrell. She is survived by her son, Gary Barron and his wife, Filomena of Marlboro, NY; a daughter, Karen Grabowski (who was her caregiver) of Manalapan; six grandchildren; and eight great grandchildren.

A visitation will be held at the Clayton & McGirr Funeral Home, 100 Elton-Adelphia Road (Route 524), Freehold Township, NJ on Wednesday, January 18, 2023 from 9:00 AM until the procession to her 10:30 AM Funeral Mass at the Co-Cathedral of St. Robert Bellarmine, 61 Georgia Road, Freehold Township, NJ.  Entombment will follow in St. Rose of Lima Catholic Cemetery, Freehold.  For those who desire, memorial contributions can be made to the Monmouth County SPCA, 260 Wall Street, Eatontown, NJ 07724.  For information, directions or condolence messages to the family, visit www.claytonfuneralhome.com.