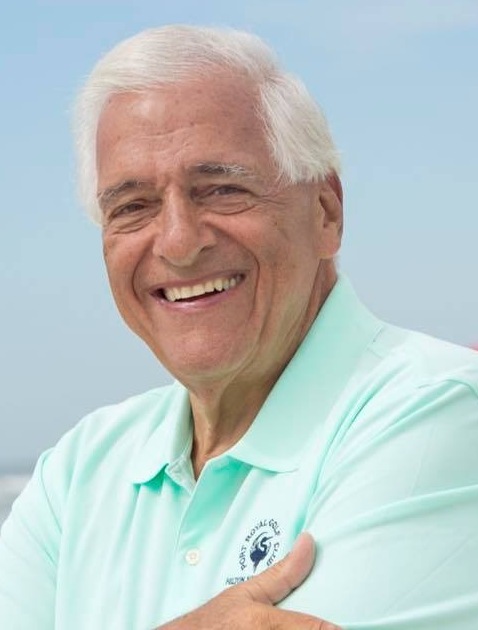 Richard Anthony Baudo, 75, of Freehold passed away at the Hospital of the University of Pennsylvania on August 21, 2019. He was born and raised in the Bensonhurst section of Brooklyn, moved to the Bronx where he started a family with his wife Maryanne, and then they moved to Glen Rock, New Jersey, and raised their five children.  After 42 years in Glen Rock, they finally went on to settle in Freehold, New Jersey, where he enjoyed his retirement. Richard selflessly served his country in the Army Reserves and bravely served as a volunteer fire fighter for the Glen Rock Fire Department for many years. He worked for Standard & Poor’s in New York for 36 years, building offices and expanding the company all around the world. He was dedicated to his company, colleagues, and employees even after retiring in 2009. He loved his home in Hilton Head, where he vacationed with his family, spent time golfing, and enjoyed sunsets on the beach.  He also loved spending any kind of time with his family, especially his grandchildren; he was a frequent spectator and proud Pop Pop at their sporting events and his cheers could be heard far and wide.

Richard was the anchor of his family and will be missed dearly by all who knew him. He was an amazing husband, father, grandfather, brother-in-law, uncle, and friend. Even people who didn’t know him well felt an immediate kinship to him because of his infectious personality. His wit and sense of humor drew people to him and left a lasting impression.  Richard was a caring man, showing love to everyone he met, and taught his family to always treat others with love as well. His light will shine on forever through his family – his legacy.  He will be remembered by every life that he touched.

He is survived by his devoted wife of 53 years, Dr. Maryanne Baudo of Freehold; five loving children—Anissa Quirk and her husband, Jim, of Holmdel, Claudia Baudo of Philadelphia, Richard A. Baudo, Jr. and his wife, Kerry, of Chicago, Dr. Melissa Marchetti and her husband, Brian, of Atlanta, and Krista Jefferies and her husband, James, of Neptune; six grandchildren—Abbey, Emma, Nolan, Rachel, Parker, and Sawyer; brother-in-law, Anthony Mascio and his wife, Karen, of Waldwick; two nieces—Jennifer Yale and her husband, Brad, and Angela Mascio and her fiancé, Daniel O’Neill; and one great-niece, Marley. He was pre-deceased by his mother and father, Millie and Leo Baudo of Brooklyn, and his granddaughter, Leighton Ann Baudo.

To celebrate the life of this wonderful man, visitation will be held at the Clayton & McGirr Funeral Home, 100 Elton-Adelphia Road (Route 524), Freehold Township on Sunday, August 25, 2019, from 3:00 to 7:00 p.m. Relatives and friends are invited to attend his 10:00 a.m. Funeral Mass on Monday, August 26, 2019, at the Co-Cathedral of St. Robert Bellarmine, 61 Georgia Road, Freehold. Interment will follow at St. Gabriel’s Cemetery in Marlboro to lay him to rest. For those who desire, memorial contributions in Richard’s name may be made to The American Heart Association.  If you choose to send a tribute donation, the family would love you to consider clicking the option to send an announcement card of your donation so they can acknowledge your thoughtfulness and generosity. For more information, directions, condolence messages to the family, or to share memories, please visit www.claytonfuneralhome.com

Share Your Memory of
Richard
Upload Your Memory View All Memories
Be the first to upload a memory!