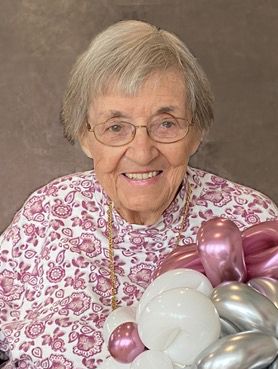 My son John’s speech at the funeral.

Thank you, Reverend, and thank you everyone for being here today.

Less than a month ago we were celebrating Mother’s Day together, sharing laughs and bloody Marys. She had just been released from quarantine after testing positive for COVID, which she described as like having allergies. At 99, It seemed like nothing could stop her.

We were all convinced we’d be celebrating her big milestone together in October, but as Robert reminded her last week, you start at year 0, so she was well into her 100th year.

63 of those years were spent with her husband, Bill, who passed away 4 years ago. They each had a child already with Linda and Jim and weren’t planning on another. So I guess I should be thankful that trip the two of them took to Atlantic City when it rained the whole weekend and 9 months later my mother Leslie was born.

100 earth years of wisdom, courage, and laughter. How many times did she tell her kids to “fight nice” or Pop Pop to turn up his hearing aid? How many seasons of vegetables did she can and many cookies did she bake?

She often said to me “Johnny, I’ve had a good life, no complaints.” Over 20 seasons in Florida with memorable trips to the Grand Ol’ Opry, and cruises to Alaska and the Panama Canal.

After Pop Pop died, we were all a bit apprehensive about how she would transition to a new life at Atria — she lived in the same house in Farmingdale for over 40 years.

Once we moved her in, she finally admitted to my Mom “Oh, I never liked that house anyway!”

Pretty soon, she started making friends and eventually worked her way up to Table 1 where she was known as “the joke lady”

I thought a lot about which of her jokes I would share with you today, but as many of you know, she preferred the off-color ones and I’m afraid I might blush.

After Pop Pop passed away, I made a habit of calling her every week to check in.

She must have thought that phones still charged by the minute, because she would rush me off before the 5 minute mark, but it was enough to learn of her routine.  Every day, after her morning walk and breakfast, she would sit down to a task: on the first day, she’d read a book, often finishing the very same day; the next day, she’d she’d take out a big book of word searches sometimes get through 20 in a day. The third day, she’d take out her colored pencils and make these beautiful drawings.

She’d call me up and say “Johnny, I’m almost through the book you got me” and I’d joke with her that at this pace and her health, I better buy a couple more years worth of books.

A seamstress and a fire fighter, they never had much, but they were always satisfied with what they had. I remember my Mom would buy them eggs at Costco and Grandmom would count out the change to the last penny. It turns out, all that extra change was going to the bank.  In her last few years, she would say “let me pay for this, I’m a rich old lady.”

She was proud to be able to pay for her own care and several years ago gave generous gifts to her grandchildren and great grand children that she wanted them to enjoy while she was still alive.

I know she was so proud to watch the extended family grow closer together to support Pop Pop and more recently, Aunt Linda. This family was everything to her and it would make her so happy to see you all here today.

I’m going to leave these coloring books out today and would encourage anyone to take home a drawing as a memory of her.

Grandmom, thank you for teaching us about strength and resilience and the importance of being grateful for every day. You were truly one of the special ones.

I am so very sorry to hear of Aunt Mary's passing. I looked forward to spending her 100th Birthday with her, as she did.

I met your Mom, thru my husband John's, Aunt Sandy Woolley,,,I went and visited her with Sandy and always enjoyed our talks...When Aunt Sandy passed away, almost 2 years ago, I still went to visit and also called her...I will miss her....RIP Aunt Mary....Patty Witkowski..

Aunt Mary lived a great life, loved family immensely, and was a great inspiration to me and many other family members. Her examples about life to all of us who knew her are priceless. The measure of a person when they pass on from this earth is whether or not they’ve left the place better than it was when she or he entered this world. Aunt Mary wins big on that——her kids, grandkids, and great-grandkids, the members of our family, the people she worked with, the friends at her church, and anyone in Farmingdale who knew her and Uncle Bill will all say, I’m sure, that their lives are better because they knew Mary and Bill and enjoyed time with them. AND, let me highlight her great cooking skills (dinner at her house was always a 10), and one of these days I will replicate her delightful macaroni and cheese casserole.