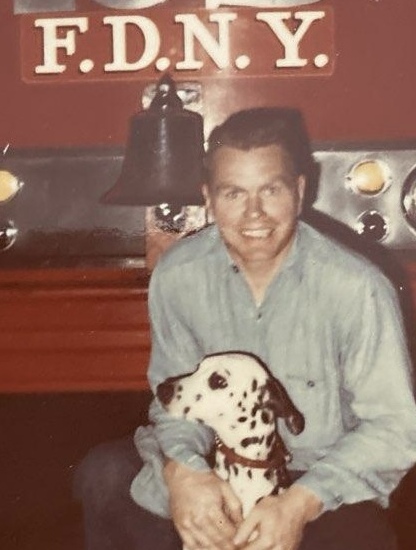 Michael J. McGarry, 86, of Howell passed away at home on Friday, December 30, 2022 surrounded by his family.  He was born in the Bronx, raised in Brooklyn, and lived in the Levittown and Bethpage sections of Long Island, and Sherman, CT before settling here in the late 90s.  Mike was a firefighter for the City of New York City Fire Department for 22 years, retiring in 1981.  He was a US Navy and Coast Guard Reservist for 28 years.  A hardworking man, Mike always worked two jobs and kept himself busy.  He enjoyed bowling throughout his life, most recently at the Howell Lanes.   In his spare time, Mike relished watching Jeopardy and Wheel of Fortune, playing cards (especially solitaire) and trivia.  He was a former volunteer firefighter for the Sherman Fire Department in Connecticut.  Mike was a former parishioner and Eucharistic Minister at St. James Catholic Church in Seaford, LI, a former parishioner of Holy Trinity Catholic Church in Sherman, CT and a current parishioner of St. Catherine of Siena Catholic Church. He was also a member of the St. Vincent de Paul Society and the Knights of Columbus at all the churches.

Mike was preceded in death by his daughter, Kathleen Fitzgerald in 2016; and brothers, John and Jimmy McGarry.  He is survived by his beloved wife of 65 years, Marie McGarry; six children, Kevin McGarry and his wife, Nancy of Brick, MaryAnn Walsh and her husband Mike of Freehold Township, Michael McGarry of Danbury, CT, Pattee McGarry of Belmont, MA, Christine Stewardson and her husband, Todd of Danville, CA, and John McGarry and his wife, Claire of Windham, NH; eighteen grandchildren, and four great grandchildren.

Visitation will be held at the Clayton & McGirr Funeral Home, 100 Elton-Adelphia Road (Route 524), Freehold Township on Tuesday, January 3, 2023 from 3:00 to 7:00 PM.  Relatives and friends are invited to attend his 10:00 AM Funeral Mass on Wednesday, January 4, 2023 at St. Catherine of Siena Catholic Church, 31 Asbury Road, Farmingdale.  Interment will be private.  For those who desire, memorial contributions in Michael’s name may be made to the Tunnel to Towers Foundation, 2361 Hylan Boulevard, Staten Island, NY 10306.  For information, directions or to leave condolence messages, visit www.claytonfuneralhome.com

Get Directions
Share Your Memory of
Michael
Upload Your Memory View All Memories
Be the first to upload a memory!
Share A Memory